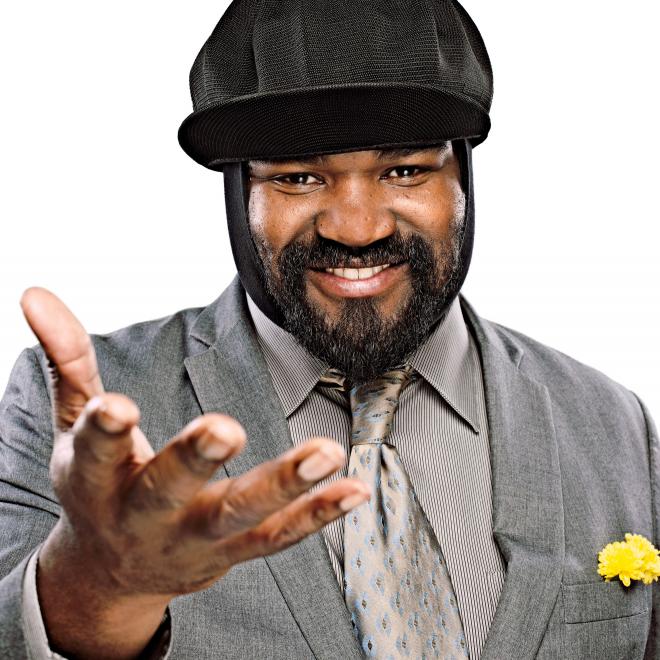 Best Jazz Vocal Album, Grammy Award, 2014 (…) singer with the rich baritone and the ever-present Kangol hat is on a mission to revive old-school musical values… Possessed of massive vocal power offset by a rich tone and delicate control, his interpretations flit between jazz and soul, with the finesse of the former and strength of the latter in equal measure. - MOJO The ’70s soul is still quite apparent in his voice, with shades of Donny Hathaway and Bill Withers, but he’s also the vocal heir to Nat King Cole…a major talent, not just as a singer but also as a composer, with a unique, elliptical style, both for melodies and lyrics… - ALLMUSIC.COM Jazz, soul, and gospel singer, songwriter, and actor GREGORY PORTER was born in Los Angeles, California but grew up in Bakersfield, California, where his mother was a minister. As a child, he fell under the spell of his mother's Nat King Cole records, learning to imitate and sing like Cole, but his early aspirations were in sports. He was awarded a football scholarship to attend San Diego State University, but after an injury to his shoulder derailed his sports career, he began performing in local jazz clubs, which is where he met saxophonist, composer, and pianist Kamau Kenyatta. Kenyatta became Porter's mentor, introducing him to flutist Hubert Laws, who featured Porter's vocals on a track on his 1998 album Hubert Laws' Remembers the Unforgettable Nat King Cole. Laws' sister, Eloise Laws, heard Porter during the studio sessions and was impressed with his singing; he helped him get cast as one of the leads in a new musical It Ain't Nothing But the Blues, which eventually enjoyed a run on Broadway. The gates were open for Porter. His debut album, Water, appeared in 2010, and was nominated for Best Jazz Vocal album at the 53rd Annual Grammy Awards. It was followed by a second, Be Good, released two years later in 2012. The title track was nominated for Best Traditional R&B Performance at the 55th Annual Grammy Awards. In September of 2013, Porter (accompanied by Airto) appeared on a track from Kentiyah Presents Evolutionary Minded: Furthering the Legacy of Gil Scott-Heron, with M-1, Brian Jackson, Chuck D., Killah Priest, Martin Luther, and others; a week later, he issued his third album, Liquid Spirit, produced by Brian Bacchus. The album won the 2014 Grammy for Best Jazz Vocal Album.

Porter’s concert at the Festival this summer will also be his debut performance in Croatia.