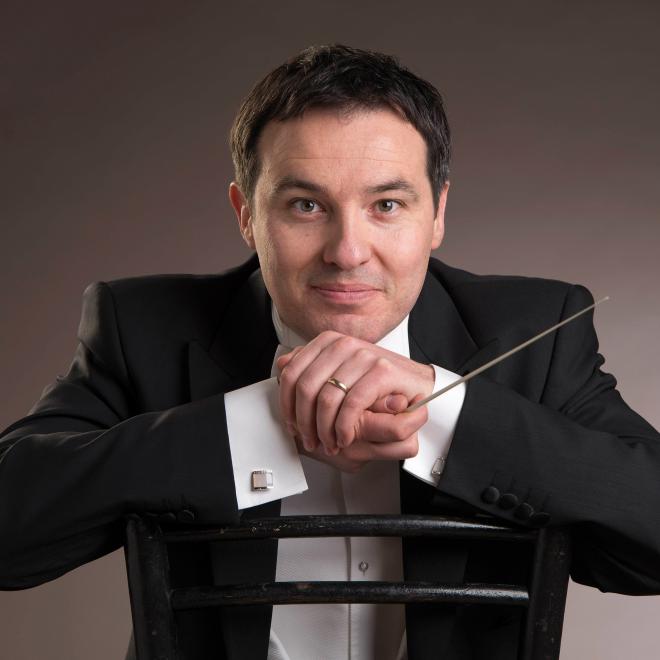 Croatian conductor Ivan Repušić (Imotski, 1978) studied conducting at the Zagreb Academy of Music under Igor Gjadrov and Vjekoslav Šutej and continued his studies with renowned conductors Jorma Panula and Gianluigi Gelmetti. He served as assistant to Kazushi Ono (Badisches Staatstheater Karlsruhe) and Donald Runnicles (Deutsche Oper Berlin). He began conducting in 2002 at the Croatian National Theatre Split, where he served as Chief Conductor and Opera Director from 2006 to 2008, which resulted in numerous successful performances, such as Don Carlos, Aida, Simon Boccanegra, Nabucco (G. Verdi), Suor Angelica, Gianni Schicchi, Manon Lescaut, La Bohème (G. Puccini), Eugene Onegin (P. I. Tchaikovsky), Faust (Ch. Gounod), Lucia di Lammermoor, L'elisir d'amore (G. Donizetti) and I Pagliacci (R. Leoncavallo). He was the Music Director of the Split Summer Festival (2006 - 2009) and Dubrovnik Summer Festival (2009 - 2012). He has been Chief Conductor of the Zadar Chamber Orchestra since 2005. He has conducted all renowned orchestras and opera ensembles in Croatia, as well as the Deutsche Oper Berlin, the Berlin Radio Symphony Orchestra, the Giuseppe Verdi Symphony Orchestra Milan, the Prague Symphony Orchestra, the State Opera Orchestra Hanover, the Slovenian and Brussels Philharmonic Orchestras, the Munich Radio Orchestra and many others. He has appeared at all major Croatian and international festivals and concert halls, including the Musikverein Vienna, the Baden-Baden Festspielhaus, the Berlin Konzerthaus, the Berlin Philharmonie, the Smetana Hall in Prague and the Lucerne Concert Hall, as well as the Verdi Festival in Parma and the Mecklenburg-West Pomerania Festival. From 2010 to 2013 he served as the principal Kapellmeister at the State Opera Hanover, where he successfully conducted Falstaff, Otello, Tannhäuser, Eugene Onegin, La Bohème, Carmen, The Abduction from the Seraglio, Faust etc. In 2011 he made his debut at the Deutsche Oper Berlin with Puccini's opera La Bohème and subsequently successfully conducted numerous operas as Kapellmeister (from season 2012/13) and Principal Guest Conductor (from season 2014/15). He has regularly and successfully conducted orchestras at other major German opera houses (the Hamburg State Opera, the Semperoper Dresden and the Komische Oper Berlin). He has won numerous prestigious awards, including the Milka Trnina Award, the Zagreb Philharmonic Orchestra and PBZ American Express Award, the Slobodna Dalmacija magazine’s Judita Award, the Ante Marušić Award, the Slobodna Dalmacija magazine’s Jure Kaštelan Award, the Croatian Radio and Television Orlando Award and the Croatian Actor Award. Alongside conducting, he served as a lecturer at the Arts Academy of the University of Split (2003 - 2017). Since the season 2016/17 he is the General Music Director of the State Opera Hanover. Since the beginning of the season 2017/18 he has served as Chief Conductor of the Munich Radio Orchestra.