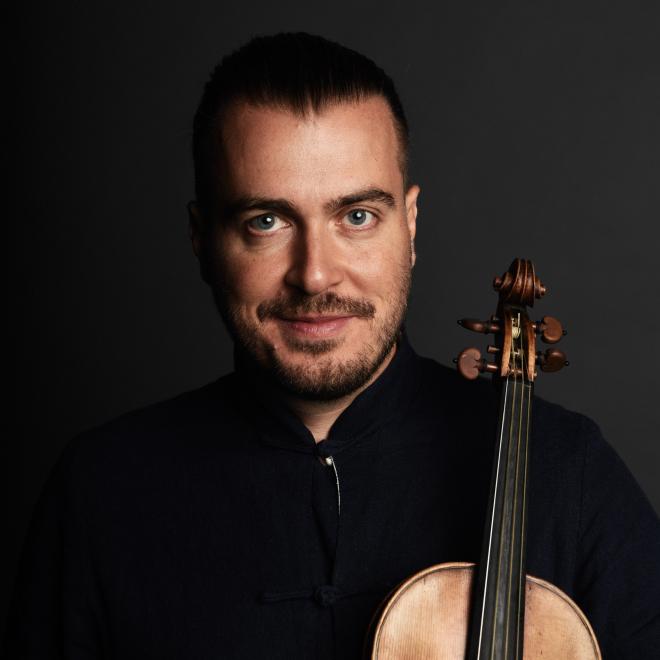 Dmitry Sinkovsky possesses a rare combination of Russian virtuosity and Italian cantabilità. A conductor, violinist, and countertenor, he weaves these three disciplines together with a profound musical awareness, boundless energy, and astonishing technique, resulting in electrifying performances that captivate audiences across the globe.

A winner of awards at major European competitions, Dmitry began his celebrated career working with the most prestigious Early Music ensembles, such as Il Giardino Armonico, Il Complesso Barocco, Il Pomo D’Oro, Musica Petropolitana and Accademia Bizantina. As an associated artist, he is closely tied to the Belgian ensemble B'Rock and has a had a long-term collaboration with lutenist Luca Pianca and his Ensemble Claudiana, as well as the Helsinki Baroque Orchestra. Additional collaborations have included artists like Alexei Lubimov, Teodor Currentzis, Alexander Rudin, Dorothee Oberlinger, Andreas Scholl, Kristina Mhkitaryan, Christophe Coin, Martina Filjak, and Skip Sempé.

Complementing his achievements in Baroque music, Dmitry maintains an active profile as a classical violinist and conductor, with a diverse repertoire ranging from Mozart to Berg, from Beethoven to Bartók. Equally passionate about choral music, Dmitry works closely with the vocal ensemble Antiphonus Zagreb. He has performed as both conductor and soloist with the Seattle Symphony in Handel’s Messiah and Vivaldi’s Gloria and returned this season to conduct a program of Bach Cantatas with the Seattle Symphony Chorale.

Dmitry’s international conducting career was launched in the 2012-13 season, when he was featured as a guest on Joyce DiDonato’s acclaimed Drama Queens tour. Today, he remains in high demand, performing extensively across Europe, Russia, Asia, Australia and North America. In 2018, he served as resident conductor of the Seattle Symphony Orchestra, where he has been a regular guest since the 2015-16 Season. Additional appearances in the U.S. include his debut with the Detroit Symphony Orchestra, which resulted in an immediate re-engagement as conductor, violinist and countertenor. In Europe, he has led the Spanish National Orchestra, Sinfonietta Riga, MusicaAeterna, Kremerata Baltica, Orchestra Casa da Música Porto, and the Tallinn Chamber Orchestra, among others.

In 2011 Dmitry founded his own period instrument ensemble, La Voce Strumentale. Together they released two CD’s under the French label Naïve: Vivaldi's Four Seasons (2015) and Bach in Black (2017), and perform at major international festivals and concert halls throughout Europe. Critics have praised the unique sound of their string section - each musician bringing their personality, yet accomplishing a homogeneity that is rarely attained and thrilling to hear.

Having already embarked on an impressive career as a violinist, in 2007 Dmitry decided to pursue his talent as a countertenor, under the guidance of Michael Chance, Jana Ivanilova and Marie Daveluy. Performances as countertenor have included Pergolesi's Stabat Mater at the Lucerne Festival; the title role of Handel's Lucio Silla at the Internationale Händel-Festspiele Göttingen and at the Ludwigsburger Schlossfestspiele; and the role of Ruggero in Vivaldi's Orlando furioso with the Klaipėda Chamber Orchestra, which he also conducted. He is an invited artist of the Bolshoi Theatre in Moscow.

Highlights of the past seasons include performances of Beethoven’s Triple Concerto as well as concerts with Julia Lezhneva & La Voce Strumentale at Zaryadaye Hall in Moscow, the Berlin Philharmonie, and at the Schleswig-Holstein Music Festival, Innsbrucker Festwochen der Alten Musik, Sion Festival, and Rheingau Festival.  Additional projects in Moscow with La Voce Strumentale include Handel's Il trionfo del Tempo e del Disinganno. Starring his frequent onstage partner, Julia Lezhneva, as well Anne Dennis and Andrew Goodwin, the production featured Dmitry as conductor and vocalist, singing the role of Disinganno.  In 2020, he returned to conduct the symphony orchestras of Seattle and Detroit, and made his debut with the Orquesta de Extremadura conducting Mozart's Prague Symphony. Additional invitations in the United Sates have included the Utah Symphony Orchestra, Saint Paul Chamber Orchestra and Saint Louis Symphony (all of which have been impacted by COVID-19). Upcoming engagements include re-invitations as conductor and soloist by the Detroit Symphony Orchestra, the Moscow Musica Viva Chamber Orchestra, the Budapest Radio Orchestra, Sinfonietta Riga, and the Tallin Chamber Orchestra; debuts with the State Academic Chamber Orchestra of Russia, the RTÉ National Orchestra Dublin, and the Scottish Chamber Orchestra; tours with B'Rock and the Helsinki Baroque Orchestra, with Dorothee Oberlinger and Luca Pianca; and concerts with La Voce Strumentale at the Berlin Philharmonie and the Dubrovnik Festival.

A versatile performer, Dmitry has enjoyed an ongoing collaboration with actors Elizaveta Boyarskaya and Anatoly Bely, appearing as singer, violinist, and actor in 1926, a breathtaking production based on the lives of esteemed poets Boris Pasternak, Marina Tsvetaeva, and Rainer Maria Rilke. Under the stage direction of Alla Damsker, they have been touring this production to Russian-speaking countries since 2018.

Dmitry’s many recordings include Vivaldi's Concerti per violino V Per Pisendel under naïve's Vivaldi Edition (Diapason d’Or); critically-acclaimed world-premiere recordings of violin concertos by Tietz and Rosetti with the Pratum Integrum Orchestra (Caro Mitis); Telemann's Trio Sonatas (Berlin Classics) with Erik Boosgraf; and Schumann's Fantasies and Fairy Tales (Naxos) with Aapo Häkkinen, among others. In October 2019, naïve released Il Virtuosissimo, an album featuring Dmitry on virtuoso violin concertos by Locatelli, Tartini, Leclair, and Telemann with Il Pomo d'Oro, which was awarded a Diapason d'Or. Dmitry is thrilled to have begun a new collaboration with the label Glossa. The first recording, Beethoven's Violin and Triple concerts with Alexei Lyubimov, Alexander Rudin and the Moscow Chamber Orchestra Musica Viva, was released in September 2020 and has been nominated for an ICMA award. 2020 has also seen the release of another ICMA nominated album, The Discovery of Passion with Dorothee Oberlinger (Deutsche Harmonia Mundi).

Dmitry is a professor at the Moscow State Conservatory, and artistic director of the Orlando Furioso Festival in Dubrovnik. He studied violin at the Moscow Conservatory under Alexander Kirov, and choral conducting at the Zagreb Music Academy under Tomislav Fačini. Additional studies include operatic and orchestral conducting under the guidance of Sabrie Bekirova in Toulouse. He plays a violin by Francesco Rugeri (1675) loaned by the Jumpstart Jr. Foundation.