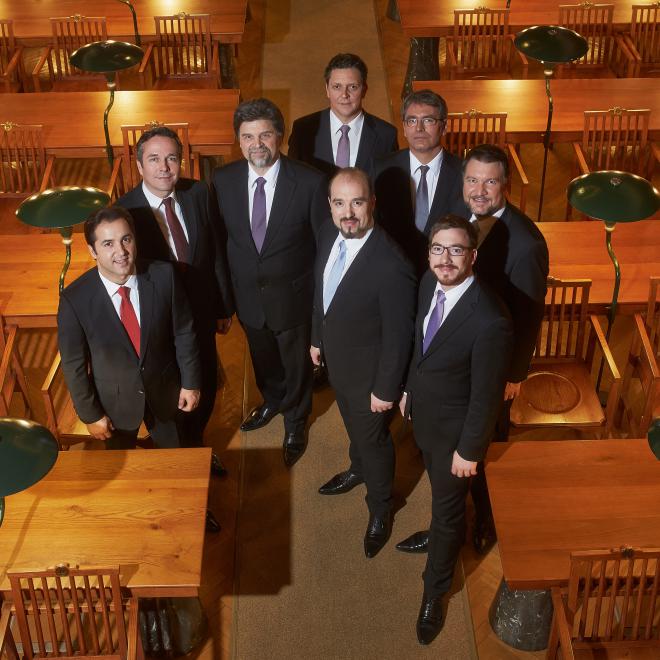 The date 27 September 1951 represents an important milestone for Slovenian vocal music. At the initiative of Slovenian immigrants living in North America, eight male singers were chosen at a demanding audition in a small hall at the Slovenian Philharmonic building. Thus, the Slovene Octet was founded.

From the very beginning, the Slovene Octet's main aim was to nurture and ennoble vocal music, from the Renaissance to the contemporary period. In addition, Slovenian folk music represented a very important part of their repertoire, and was brought to many different parts of the world.

In its 60 years of existence, the Slovene Octet has performed on all important stages around the world, never neglecting their fellow countrymen. Many singers have been members of the group, but all of them sharing a strong bond with the Slovenian nation.

With its enchanting singing and performances, the Slovene Octet has served as a shining example for many groups. During all these years, over 100 hundred octets have been founded in Slovenia. More than 40 singers have been a part of the Slovene Octet, some of them top-flight musicians, performing in the biggest concerts and opera houses across Europe.

The Slovene Octet has received several awards: the Prešeren Award in 1957, the Prešeren Foundation Award in 1964, the National Certificate of Merit in 1966, an award from the Association of Slovene Composers in 1971, the Drabosnjakova Award in 1975, the Orlando Di Lasso Award in 1984 and the Golden Order of Freedom of the Republic of Slovenia in 1996.

Another important milestone for the Slovene Octet was reached in 1996 when the entire group of singers was changed. The Slovene Octet was rejuvenated and began down a new path to musical perfection, remaining faithful to its tradition. The group's 50th anniversary concert included its best-known songs, which brought the Slovene Octet its worldwide fame. The group has published three CDs with the most beautiful Slovenian songs. In 2007, the book Slovenski oktet (Slovene Octet) by Boris Pangerc, which summarised the group's activities over the years, was published.

The Slovene Octet performs at all major music festivals and encourages young groups across Slovenia to cherish Slovenian folk and artistic music.