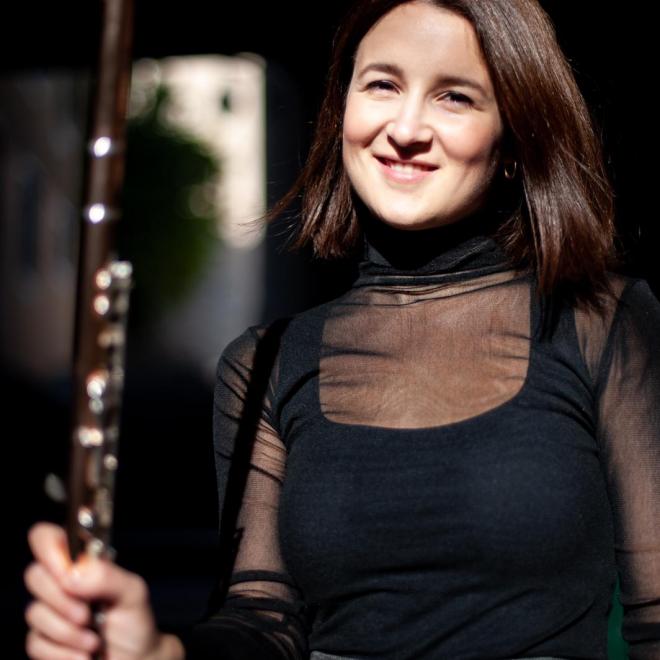 Croatian flutist Lucija Stilinović is an active orchestral musician and soloist. In 2021 she won the First Prize at the Boris Papandopulo National Competition for Young Musicians in the flute category. Also, in 2020 she won the First Prize at the 17th International Competition for Young Musicians Ferdo Livadić. She has performed on some of the most famous Croatian classical music festivals such as Osor Musical Evenings with the Zagreb Soloists, St. Marko’s Festival, Samobor Festival 2021 (a premiere of the new piece written by Mirela Ivičević).

In February 2022 she performed the Ibert Concerto with the Croatian Radio Symphony Orchestra.

In 2020 she became a Recipient of The Elaine and Stephen Stamas New York Philharmonic Scholarship Fund. In 2019 she won the Second Prize of the 2019 Serge & Olga Koussevitsky Young Artists Awards Competition. Ms. Stilinović made her European debut in June 2018 as a concerto soloist with the Zagreb Philharmonic Orchestra in a homecoming performance to much acclaim. She was also the winner of the 2016 British Flute Society Young Artist Competition, and was invited to perform in the BFS Flutastique Festival in London that same year.

Ms. Stilinović holds degrees from the Academy of Music, University of Zagreb (Renata Penezić), Royal Conservatoire of Antwerp (Aldo Baerten), Manhattan School of Music with Robert Langevin, and the Certificate of Performance with Karl-Heinz Schütz at the Music and Arts University of the City of Vienna (MUK). She has attended Utrecht Conservatorium in The Netherlands as an exchange student, and was a Scholar of the International Music Academy in the Principality of Liechtenstein.

In addition to modern flute, Ms. Stilinović enjoys playing the traverso flute, which she learnt from Rachel Brown and Wilbert Hazelzet and has performed with Ensemble Melisse at the Utrecht Early Music Festival.