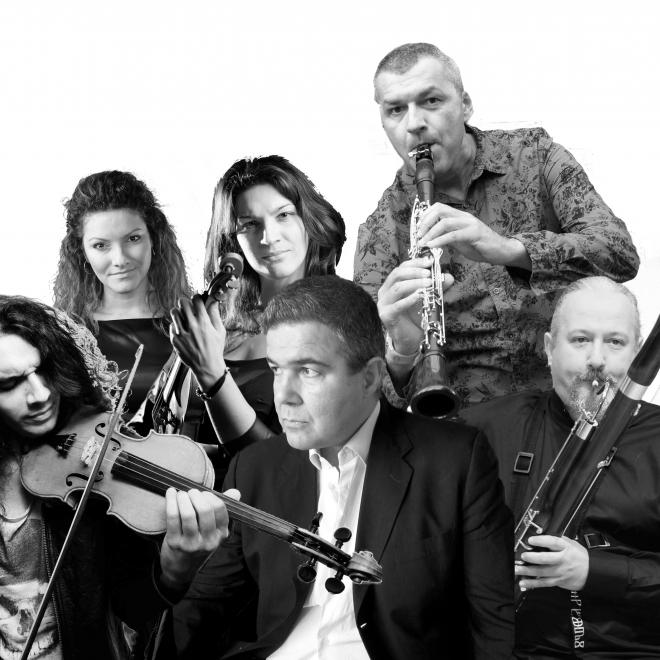 DEJAN SINADINOVIĆ pianist, professor at the Faculty of Music, University of Art in Belgrade, president of European Piano Teachers Association in Serbia, recognized internationally as one of Serbia’s most versatile and imaginative musicians and among today’s most engaging pianists in his country. Studied with Arbo Valdma at the Faculty of Music Art in Belgrade and Eliso Virsaladze at the Moscow Tchaikovsky Conservatory. He is in demand for a wide variety of chamber music alliances, as well as appearing on major international concert platforms in recitals (more than one hundred in last ten years, throughout Europe - in Italy, France, Spain, Poland, Germany, Belgium, Switzerland, United Kingdom, Montenegro, Greece, Northern Cyprus, Denmark, Russia, Romania). He enjoys associations with many orchestras (W. Lutosławski Philharmonic, Wroclaw, Rzeszow Philharmonic, Poland, Transylvania State Philharmonic Orchestra - Romania, Belgrade Philharmonic, Orchestra Sinfonica di Roma, to name a few) and is a great partner of many distinguished chamber musicians (Artis Quartet and Minetti Quartet from Viena, Meridies Quartet from Italy). He published three CD’s for Spanish label KNS Classical. Dejan Sinadinović has been the artistic vision behind several festivals and concert series that he has founded. ‘Piano Chamber Festival’ in 2005 (Belgrade), Emil Hayek Festival (Belgrade), and all six editions of the Spring Piano Feast (Belgrade) established his reputation as an astute programmer.

NEMANJA RADULOVIĆ was born in Serbia in 1985 and studied in at the Faculty of Arts and Music in Belgrade, the Saarlandes Hochschule für Musik und Theater in Saarbrücken, and the world-renowned Paris Conservatoire. In just a few years, Nemanja Radulović has taken the classical music world by storm with his virtuosic playing and adventurous programming. Recently signed as an exclusive artist with Deutsche Grammophon, with whom he releases his most recent recording in November 2014. His performances have taken him across the globe to halls such as the Carnegie Hall in New York, Concertgebouw in Amsterdam, Philharmonie in Berlin, Salle Pleyel and Théâtre des Champs-Élysées in Paris, Megaron in Athens, Suntory Hall in Tokyo, Teatro Colón in Buenos Aires and the Melbourne Recital Hall, with his many recital partners including Marielle Nordmann, Laure Favre-Kahn, and Susan Manoff – with whom he has also recorded a disc of Beethoven Sonatas released on the Decca/Universal Music label. His ensemble ‘Double Sens’ is also widely renowned for their chamber music prowess, recently recording the CD ‘5 Seasons’ – the ‘4 Seasons’ by Vivaldi plus a new composition – also for Decca/Universal Music label. His longstanding relationship with Universal has led him to record, in addition to his ensemble CD releases, his recent solo CD with Deutsche Grammophone of Paganini entitled ‘Paganini Fantasy’ (2013). He has been awarded ‘International Revelation of the Year’ by Victoires de la Musique in 2005, ‘Best Artist’ by the same in 2014 and an Honorary Doctorate from the University of Arts in Niš, Serbia.

TIJANA MILOŠEVIĆ at the age of 15, enrolled at Music Academy in the class of prof. Dejan Mihailović, where she graduated and later obtained a Masters Degree. In 2001, Tijana earned an Artist Diploma at Julliard School of Music, and during her study she had an opportunity to perform as a soloist and with the chamber and Julliard Symphony Orchestra. As the youngest concertmaster in the history of the Belgrade Philharmonic Orchestra, she performed and continues to perform with the world outstanding artists Zubin Mehta, Nigel Kennedy, Jose Carreras, Maxim Vengerov.

KSENIJA MILOŠEVIĆ studied the violin in the class of Prof. Dejan Mihailović and graduated from the Faculty of Music Arts in Belgrade. In 2005, she received the Masters of Music degree. Ksenija has won many awards and performed as a soloist with prominent Serbian orchestras. Since 2001, she has been an assistant concertmaster of the Belgrade Philharmonic Orchestra.

MILAN MILOSEVIĆ earned his Doctor of Musical Arts in clarinet performance at the University of British Columbia. Most recently, he was a recipient of the British Columbia Arts Council Award, the UBC Faculty of Graduate Studies Research Award, and the UBC Graduate Award for Academic Excellence. Milan is a representative and endorsed artist of Backun MoBa Clarinets, Légère Reeds, Canada; Silverstein Works, USA; and Stowasser J. Tárogató, Hungary. Milan is currently holding the position of Director of the music department and clarinet instructor at Vancouver College. Prior to his doctoral studies at UBC, he held a clarinet position with the Belgrade Philharmonic Orchestra and clarinet sessional lecturer at the University of Manitoba. During his tenure, he served as an artistic co-director of the Belgrade Philharmonic Woodwind Ensemble and the International Woodwind Quintet – Synergy 5. Milan was a featured soloist and ensemble performer at the Groundswell – Contemporary Music Series and New Music Festival with the Winnipeg Symphony Orchestra. Milan Milosevic has been a featured performing artist in a number of CBC Radio 2 national broadcast performances and numerous TV and Radio broadcasts in Belgrade, Serbia. Most recently, he has been a guest lecturer at scholarly conferences and master-classes, including the world premiere performance of commissioned work at Jackson State University, The University of British Columbia, Split School of Music in Croatia, The University of Belgrade, Faculty of Music in Serbia and Capilano University, Music Department. He has also performed with the Vancouver New Music Society, Redshift Music Society and Virtuosi Concert Series at the University of Winnipeg; Vancouver Symphony Orchestra and frequently collaborates with the Vancouver Inter-Cultural Orchestra. The International Clarinet Association journal The Clarinet CD review panel praised his new and extended clarinet performance techniques on the featured album "Pearls & Yarn" as “eclectic, ground-breaking and innovative.” His Brahms & Beethoven recordings were cited as  “Lush and seductive...expressive & well controlled...mellow throughout the instrument’s range.” Milan is a featured artist of Summit Records, AZ & Chromadisc, Canada.

ŽARKO PERIŠIĆ was born in 1967 in Split, Croatia. There, he completed his primary and secondary music education. He passes the preliminary exam at Music Academy in Zagreb in 1985, course bassoon, class of the Prof. Marijan Kobetić. During the study in Zagreb, where he also graduates in 1990, he receives numerous awards at the republic and federal competitions as bassoon player and chamber musician. Thus, in 1989 he has won the competition of young artist of Yugoslavia (wins the second award, the award for the first place wasn't given), and the next year at the same competition he wins awards for brass instruments trio and brass instruments quintet. He was awarded with the Rector's Award of the University of Zagreb, and with the award of the brass instrument department of the Academy. After completion of the studies he continues with advanced training in the High Musical School Mozarteum in Salzburg, graduate studies in the class of Prof. Milan Turković. In 1992, he enrolled into position of the first coordinating bassoon player in the orchestra of Israeli radio in Jerusalem, where he works until the August of 1996. During that period he also performs as a soloist with orchestra King David violins from Jerusalem, with string chamber orchestra and symphony orchestra from Tel Aviv, and he leads brass instruments quintet of Symphony Orchestra from Jerusalem, as well as, string trio Divertimento. Starting from the September of 1996, he moved to a position of solo bassoon player in Salzburg Chamber Philharmonic Orchestra, where he performs (besides his other engagements) even today, continuing his graduate studies at Mozarteum in Salzburg, in class of Prof. Richard Galler. From 1997, he worked as a lecturer at Academy of Arts in Novi Sad, at the subjects/course of bassoon, chamber music, orchestra passages, and he receives the title of assistant professor in 1999. He is a founder of brass instruments quintet „ Synergy 5, and from 2001, he becomes solo bassoon player and a member of Artistic Council " Vojvodina symphonic orchestra in Novi Sad, where he is actively engaged as a performer and manager of soloists and conductors. He performs concerts with the following ensembles: Camerata Salzburg, «Austrian ensemble/troupe for new music» from Salzburg, Twenty Century and Klangforum from Vienna, orchestras Gustav Mahler chamber orchestra, Georgian Chamber Orchestra, MozarteumOrchestra, Budapest Festival Orchestra, Chamber Orchestra of Europe throughout Europe where he also regularly performs as a bassoon soloist. He participates at the festival in Villars, Switzerland, and at the festival Days of Strauss in Garmisch-Partenkirchen - the place where Richard Strauss had once dwelt and composed some of his works. In 2004 he is admitted into position of assistant lecturer for bassoon at Musical Academy in Zagreb. The next year he participates at Zagreb's Biennial - an international festival of contemporary music. From 2005 he performs as a principal bassoonist of HRT symphony orchestra - in Zagreb.