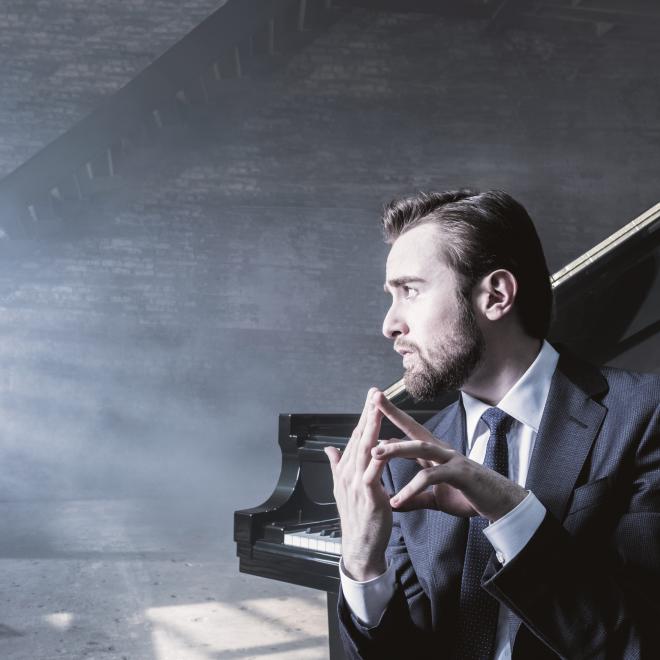 Russian pianist Daniil Trifonov – winner of Gramophone’s 2016 Artist of the Year award – has made a spectacular ascent in the world of classical music as a solo artist, a champion of the concerto repertoire, a collaborator at the keyboard in chamber music and song, and a composer. Combining consummate technique with rare sensitivity and depth, his performances are a perpetual source of awe. The Times (UK) calls Trifonov “without question the most astounding pianist of our age.”

Focusing on Chopin in the 2017-18 season, Trifonov releases Chopin: Evocation, his fourth album as an exclusive Deutsche Grammophon artist, which includes both works by Chopin himself and, marking Trifonov’s first foray into a new repertoire, works of 20th-century composers who were greatly influenced by the Polish master, including Samuel Barber, Federico Mompou and others.

The pianist gives over 20 recitals on the same theme across the U.S., Europe and Asia this season, including one in Carnegie Hall as part of a seven-concert, season-long Perspectives series which he curates. Three of the seven concerts are devoted to Chopin and his influence: the solo recital and two all-Chopin programs with cellist Gautier Capuçon and the Kremerata Baltica chamber orchestra. Further concerts in the series include collaborations with baritone Matthias Goerne and Trifonov’s teacher and mentor Sergei Babayan, the latter capping a U.S. tour that includes the world premiere of a Carnegie-commissioned work for two pianos by Mauro Lanza; a performance of his own piano concerto with Valery Gergiev leading the Mariinsky Orchestra, again culminating a U.S. tour; and a solo recital in Zankel Hall that includes a seminal piece from each decade of the 20th century.

Other season highlights include an Asian tour, European tours with violinist Gidon Kremer and Kremerata Baltica, the London Philharmonic, the Royal Concertgebouw Orchestra, and the Teatro alla Scala Orchestra. Further orchestral appearances include Strauss’s Burleske with the Spanish National Orchestra and Bavarian Radio Symphony Orchestra; the Schumann Concerto with Lisbon’s Gulbenkian Orchestra and the Berlin Philharmonic; Prokofiev with the Mariinsky Orchestra led by Gergiev, and the Cleveland Orchestra led by Michael Tilson Thomas; Scriabin’s Piano Concerto with the Seattle Symphony and Ludovic Morlot; a performance of his own piano concerto with the Detroit Symphony; and Rachmaninoff performances with Gergiev and the Munich Philharmonic, the Toronto Symphony led by Peter Oundjian, and the Philadelphia Orchestra under the baton of Yannick Nézet-Séguin.

It was during the 2010-11 season that Trifonov won medals at the world’s most prestigious competitions, taking Third Prize in Warsaw’s Chopin Competition, First Prize in Tel Aviv’s Rubinstein Competition, and both First Prize and Grand Prix – an additional honor bestowed on the best overall competitor in any category – in Moscow’s Tchaikovsky Competition. In 2013 he was also awarded the prestigious Franco Abbiati Prize for Best Instrumental Soloist by Italy’s foremost music critics. Born in Nizhny Novgorod in 1991, Trifonov began his musical training at the age of five, and went on to attend Moscow’s Gnessin School of Music as a student of Tatiana Zelikman, before pursuing his piano studies with Sergei Babayan at the Cleveland Institute of Music. He has also studied composition, and continues to write for piano, chamber ensemble, and orchestra. When he premiered his own piano concerto in 2013, the Cleveland Plain Dealer marveled: “Even having seen it, one cannot quite believe it. Such is the artistry of pianist-composer Daniil Trifonov.”