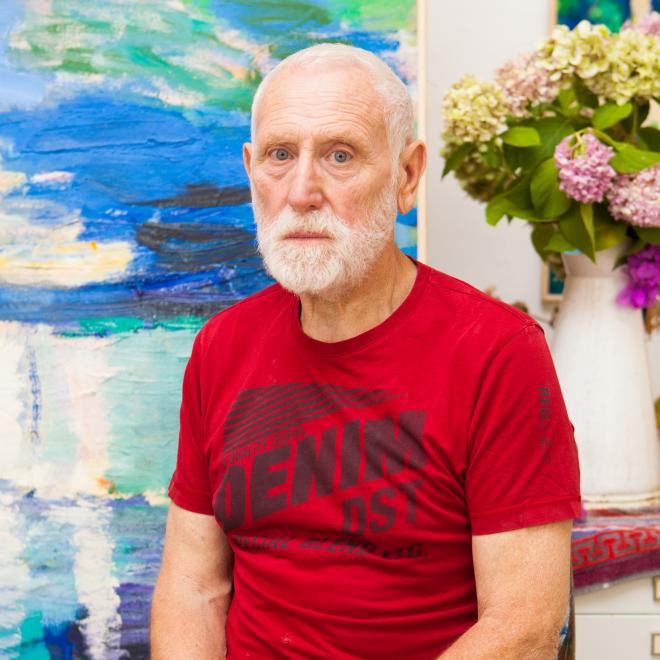 Josip Pino Trostmann was born in Dubrovnik on 9 June 1938. Already at the age of ten he started attending the school of portrait organised by the renowned painter Ivo Dulčić. In 1963 he completed his painting studies at the Zagreb Academy of Fine Arts in the class of professors Đ. Tiljak and I. Režek. The same year he became member of the Croatian Association of Artists. From 1968 until his retirement he taught numerous artists, many of whom now have well established careers. Since 1981 he carries the title of Accomplished art educator awarded by the Croatian Association of Art Educators, and in 1986 he received official commendation from the Dubrovnik City Council.

He is one of the oldest and most authentic painters of Dubrovnik, and he is recognised by art historians as one of Croatia's greatest colourist painters. He remains faithful to Dubrovnik and its well-known motifs which reappear in his cycles: Minčeta Fort, Fort of St John, Church of St Blaise, Kono quarter, terraces and pergolas of Dubrovnik. All are revealed and reflected in his paintings.

He has had about one hundred representative solo exhibitions in Croatia and abroad and he has also participated in numerous prestigious collective exhibitions. His most significant exhibitions took place at the Museum of Modern Art Dubrovnik and Sponza Palace in Dubrovnik, Museum of Arts and Crafts, Modern Gallery and Klovićevi dvori Gallery in Zagreb, as well as many other prestigious exhibition venues.

In 2005/06 he had three retrospective exhibitions (in Zagreb, Split and Dubrovnik) on the occasion of the release of the monograph TROSTMANN by Maroević.

Works by Josip Trostmann can be seen in numerous museums, galleries and collections all around the world.

This year Josip Pino TROSTMANN celebrates his 80th birthday and 55th anniversary of graduation from the Academy of Fine Arts in Zagreb. He lives and works in Dubrovnik.