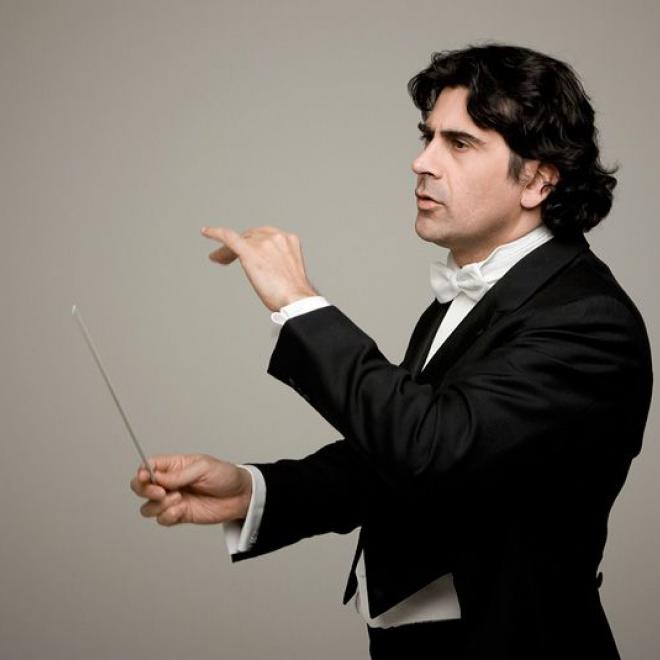 Born in Milan, Veronesi studied at the Conservatory of Verdi in Milan, after a successful degree in Piano, Orchestra composition and Direction. When he was a student he founded the Guido Cantelli Orchestra. He performed in this Orchestra until 2000 with two great performances: at the Eastern Festival in Salisburgo (invited by Claudio Abbado) and on Santa Cecilia’s day at the Maggio Musicale Fiorentino. In 1998 Mr. Veronesi has been nominated Artistic and Musical Director at the Puccini Festival in Torre del Lago, Italy. Maestro Alberto Veronesi is an official artist at the Deutsche Gramophone and he conducted many researches in the repertoire of 800’ and beginning of 900’. He focused on Artists like Pietro Mascagni, Ruggero Leoncavallo, Giacomo Puccini and others. He performed and registered also the fairly known operas in order to have a biggest audience and to give more visibility to a neglected repertoire.

In January 2010 the Opera Orchestra of New York, OONY, nominated Maestro Alberto Veronesi as Music Director from Season 2011 until 2016. Mr Veronesi will perform as Opera Director from 2012 until 2016 at the new Grand Theatre of Tianjin, named the second biggest Chinese theatre for size and planned events. On March 22th 2013 he launched the Season of the Opera 2013 with Tosca, a Puccini festival production. Maestro Veronesi has conducted the following Symphonies: The Wiener Philarmoniker in Vienna, The Orchestra of Maggio Musicale Fiorentino in Florence, the Orchestra of Theatre La Fenice in Venice, the Deutsche Opera Orchestra in Berlin, The Theatre Monnae Orchestra in Bruxelles, The Orchestra of Santa Cecilia Academy in Rome, The Philarmonic Theatre in Bologna and the Orchestra of S.Carlo Theatre in Naples.  In 2003 he won the“Abbiati” price from the italian association Critic Musicians with the production of La Bohème. From July 26th 2013 he will conduct the new preparation of “Tosca”. In November 2008 Mr. Veronesi has been designated also as Artistic Director of Philarmonic Orchestra of Bologna city Theatre where he still performing a worthwhile work about Verismo. In 2010 the multi-awarded opera “I Medici” of Leoncavallo with Daniela Dessi and Placido Domingo. In January 2011 the opera recently presented, “Fedora”of Giordano and Placido Domingo, Angela Gheorghiu and The Orchestra of La Monnais. In April 2011 Mr. Veronesi has been nominated as Permanent Musical Director of “Petruzzelli Fondation” in Bari, where he conducted also the world Premiere opera of “Lo Stesso Mare” from the book of Amos Oz and music of Mr. Fabio Vacchi. On the 9th October 2011 during the 150thItalian Unit Anniversary and together with the Celebration of Columbus Day, Mr. Veronesi has conducted the Orchestra of Petruzzelli Fundation performing songs from Bellini, Rossini, Verdi e Puccini at the Fedrick P. Rose Hall- Lincoln Center. From 2001 to 2011 Alberto Veronesi was named Permanent Artistic and Music Director of the Sicilian Symphonic Orchestra of Palermo, where he conducted the whole cycle of Symphonies from Beethoven, Bruckner, Mahler and Shostakovich, and also all the symphonies of the 900’ and contemporaries operas. From summer 2011 he realized and planned the International Bellini and Romantic Opera Festival and in october of the same year he conducted the world premiere “Mameli” of Leoncavallo, performing on stage at the Theatre Vittorio Emanule II.

Mr Veronesi is now following the “Verismo Project” in association with the Deutsche Grammophon. This Project is dedicated to the Italian post romantic repertoire.The project has started in 2006 with the performance of Edgar, the youngest work of Puccini, registred in extended version with Placido Domingo and appreciated from critics. The second album, “Puccini Ritrovato”, contains original version, Deutsche Oper in Berlin, perfomed by Angela Gheorghiu and Roberta Alagna. Opera has been performed by Domingo, Lang Lang and the Orchestra of Bologna city Theatre.