As the Libertas flag rises to the verses of the „Hymn of Freedom“, this year's 65th Dubrovnik Summer Festival, traditionally held from July 10th until August 25th, will officially open in a gala ceremony on July 10th at 9 p.m. in front of St Blaise's Church. During these 47 days of the Festival, more than 2000 artists from across the globe are to perform 80 theatre, music, ballet, folklore and other programmes on nearly 20 ambiental locations in front of an international audience. This was noted on today's media press conference held in the atrium of Sponza Palace, where the Festival's Director Ivana Medo Bogdanović, the Major of Dubrovnik Andro Vlahušić, the Deputy Prefect of the Dubrovnik-Neretva county Davorko Obuljen, the Festival's Art Director Krešimir Dolenčić and head of Vipnet Corporative Communications Dubravka Jusić were all in presence.

The Festival's Director Ivana  Medo Bogdanović opened the conference by saying - I would like to thank  the Ministry of Culture, the City of Dubrovnik, the Dubrovnik-Neretva County and everyone who has once again supported us. Thanks to the cooperation with all partners, sponsors and donors, as well as artists, all aware of these difficult times for culture, we have been able to overcome certain financial challenges. I would especially like to thank all of the respectable companies on the head with Vipnet, which support our artistic efforts and recongnise our creative energy and potential. I am hoping that our faithful audience, which is used to excellence and quailty, will once again provide us with their support over the course of the upcoming 47 days of the Festival.

-Along with the traditional Vip programme and a 20% discount on all tickets purchased in all Vip centers for 8 selected performances, we have been advancing our Festival experience for all of Dubrovnik's visitors and art lovers through the development of special, free mobile applications over the past few seasons. In addition to the Vip script of „Equinox“ , presented last year, viewers may also follow this year's „Romeo and Juliet“ subtitles on their mobile phones. Starting this year, two new applications are available : the Vip DLJI application containing all information about the Festival, as well as the Vip DSF guide, which uses the technology of extended reality transforming the Dubrovnik prince into a virtual guide through the City of Dubrovnik and the Festival. – announced Dubravka Jusić, head of Vipnet Corporative Communications. 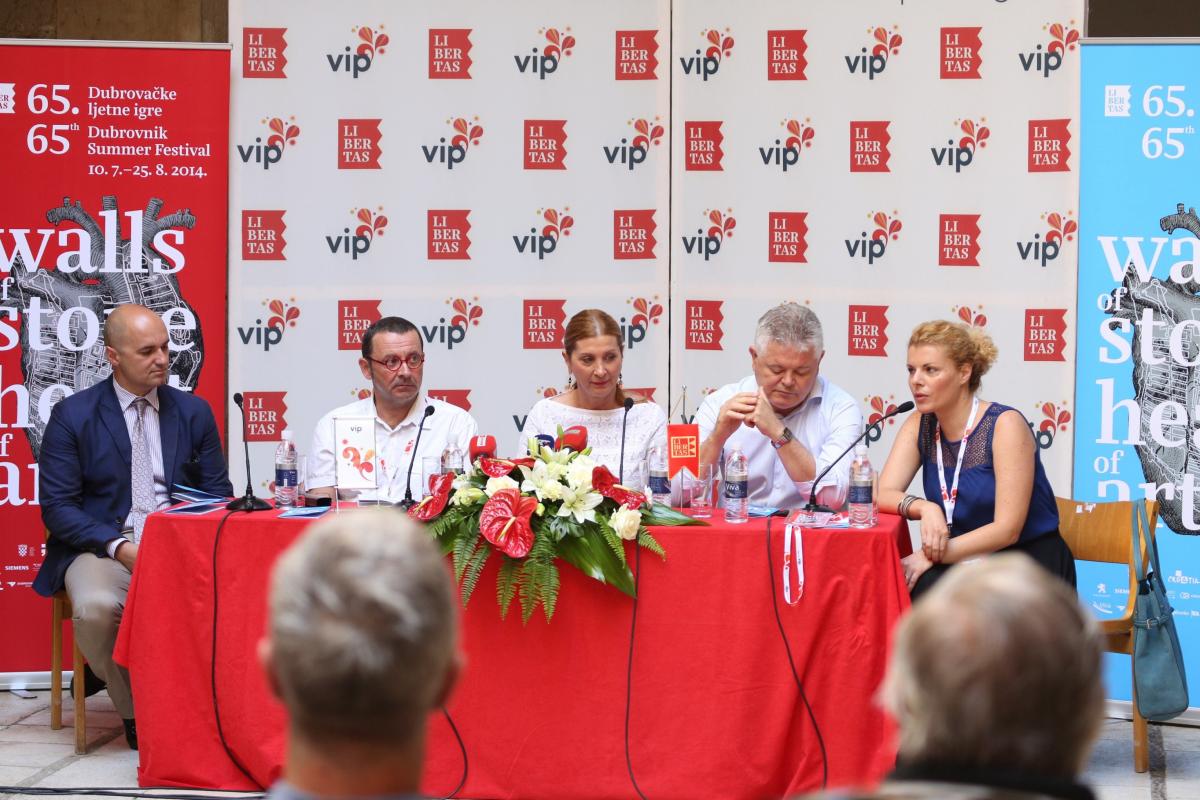 The day after the opening, as a part of the accompanying programme and regarding the Festival's 65th anniversary, the opening of the art exhibition Memory Creators – Photographers and Designers of the Dubrovnik Summer Festival, accomplished in cooperation with the Museum of Arts and Crafts in Zagreb, supported by the State Archives in Dubrovnik, will take place in two locations – in the Sponza Palace atrium and Visia Multimedia Center. It will highlight the relevance of the Festival's many photographers, great names of the Croatian photograpic history, as well as artists and designers behind the posters, home pages or wholesome visual identities of particular Festival years, therefore creating and forming an individual and collective memory in the 65-year-old continuity. Thanks to the cooperation with the Croatian Radiotelevision, documentary films titled The Summer Festival out of the Archive of the Croatian Radiotelevision, selected by Hrvoje Juvančić, will be presented as part of the exhibition, along with featured documentary films projected in the Slavica Open-Air Cinema.  Concerts of the Dubrovnik Symphony Orchestra with soloist guests, the Zagreb Soloists in the Skočibuha Summer Residence and the Vojvodina Symphony Orchestra conducted by Berislav Skenderović on Bošković Square, will take place throughout the month of July. Younger audiences and the Festival's broader audiences may find drama and musical treats in the performances of the Sudar Percussion ensemblewith Matej Meštrović, or Jazziana Croatica on Mount Srđ, along with two eulogistic and awarded visiting plays of the Academy of Dramatic Art – Nalješković's Comedy Fifth and Moliere's Tartuffe.

The premiere theatre programme of the 65th Dubrovnik Summer Festival is to be opened by Romeo and Juliet on July 25th, under the direction of Jagoš Marković, who placed one of the most beautiful love stories in the Renaissance summer residence Skočibuha located on Boninovo, not only to celebrate Shakespeare's 450th birth anniversary, but to also remind us of the value of love and the sin of hatred. Držić's most famous and most performed comedy Uncle Maroje,directed by Krešimir Dolenčić,premieres 9th August on Držić Square. Even in 2014, Dolenčić's Uncle poses current questions on father–son relationships about what we are leaving in heritage and the City we are passing on to our children. The legendary Vojnović's Equinox , directed by Joško Juvančić  and  performed by the Festival's drama ensemble, found it's place in this year's programme displaying the peaks of exellence of Dubrovnik's ambiental theatre. The Student ensemble Lero will be performing it's newest project Opscuration created according to the writings of Ruđer and Anica Bošković, which is the first ever adaptation of their notes in the Croatian theatre. On August 5th, the Croatian Victory and National Thanksgiving Day, there will be a performance of fragments from Džemila Bukovica's War Diary in the Aquarium. On the same day „Writers in Sponza“ , an accomplished project in partnership with the Croatian Writers Association, will continue it's last year's success. It will include premieres of fragments from the novel Ocean Sea selected and adapted by Mani Gotovac, as well as a performance by HNK Varaždin supported by the Italian Institute for Culture in Zagreb, which will be performed in the Šulić Beach in the presence of the author Alessandro Baricco, himself, who will be hosting his own literitary evening. Furthermore, the audience will be presented with a theatrical version of a piece by Ivo Brešan directed by Vinko Brešan along with an evening with the author Ivan Vidić. An evening with Arsen Dedić alonside Matija Dedić on the piano will be held in the Rector's Palace as part of a project under the title A Writer of All Genres.

A Neobarqoue ballet cooproduction of the Dubrovnik Summer Festival, the Ljubljana Festival and the Slovenian National Thetare from Maribor Dangerous Liaisons, directed and choreographed by Valentina Turcu and Leo Mujić, will be placed on Bošković Square. It is based on the motives of the novel Les Liaisons dangereuses by Pierre Choderlos de Laclose, and performed to the music of baroque masters. Following the premiere in Dubrovnik, the ballet is to be performed in Križanke at the Ljubljana Festival, after which it will be placed on the repertoire of SNG Maribor. Ballet lovers will also have the opportunity to enjoy a ballet concert by the International Summer Ballet School Preparation...grand sissone with great ballet names such as Nina Semizorova and Aleksandar Lukjanov.

Ambiental city spaces will be filled with Baroque music this summer, along with it's contemporary reflections. The program's musical outline consists of three notable european ensembles representing the three most important national Baroque styles. Italian Baroque will be therefore presented by the Concerto de' Cavalieri ensemble under the artistic guidence of Marcella di Lise performing the serenade Erminia, Tancredi, Polidoro e Pastore by Alessandro Scarlatti. German Baroque will be presented by Bach's Orchestra of the Leipzig Gewandhaus, one of the most illustrious orchestras in the world, which will be performing all six of Bach's concerts. Le Concert Spirituel, a notable vocal- instrumental group lead by the renowed Hervé Niquet, is to present compositions of French Baroque performing French sacral music from the time of Louis the XIV., the Sun King, which is seldom performed in this region. Superb musical evenings are guaranteed by the Croatian Baroque Ensemble, Italian internationaly known painist Andrea Padova and flute soloist of the Vienna philharmony Dieter Flury. The Baroque era influenced the formation of today's music, Jazz being one of them, which will be presented by the David Gazar Trio. The trio's improvisations on Bach's themes are reputable and well-known. The  Dubrovnik Guitar Trio alongside mezzosoprano Renata Pokupić premierely performing compositions by Anđelko Klobučar and Zoran Juranić composed specifically for this occasion, will be a real musical treat, as well as a performance  by pianist Bojan Gorišek, Trumpet Quartet XL with trumpeter Eric Aubier and the Tartini quartet in the Rector's Palace. American jazz songstress and 6 time Grammy award nominee Nnenna Freelon is, without doubt, the biggest star of this year's jazz programme. In partnership with the City of Zagreb, the 65th Dubrovnik Summer Festival's closing ceremony will be held in front of St Blaise's Church. The ceremony will feature performances by the Zagreb Philharmonic Orchestra conducted by Ivo Lipanović,  alongside world-renowed bariton Željko Lučić and soprano Lana Kos.

A monography by Neva Rošić published by the Dubrovnik Summer Festival and a presentation of a scientific monography Dubrovnik Cathedral of the Assumption of the Virgin Mary, as well as a book The Old Dubrovnik Language – A Linguistic Analysis of Dubrovnik’s Adaptations of The French Comedies by author Ivana Lovrić. The Festival's film program, in cooperation with the Pula Film Festival, will include international film projections, as well as Croatian awarded films, in open-air cinemas Jadran and Slavica. Performances of folk ensembles Linđo and Lado, traditionally held on Revelin Fort Terrace, contribute to the richness of the Festival's programme.

-Dubrovnik must be kept safe. The Festival's sixty five years cannot be compared to Orlando, the knight  who guards his little space in front on St. Blaises Church with his sword. „Beware the future! „ warn Shakespeare and Držić now more than ever before, while fathers jockey their children over power, pointless arguments, money and vanity in Romeo and Juliet, as well as Uncle Maroje, even though we are merely „small grains of sand as far as the eye can reach“ , as stated by Baricco. All of this is for our City – we should protect it, aid it with our silence and respect, support it with love and envelop it with music, poetry and words of which the City itself was made. The summer has begun, so let's set our mind on the festival. We welcome you to the 65th Dubrovnik Summer Festival. – concluded the Festival's Art Director Krešimir Dolenčić. 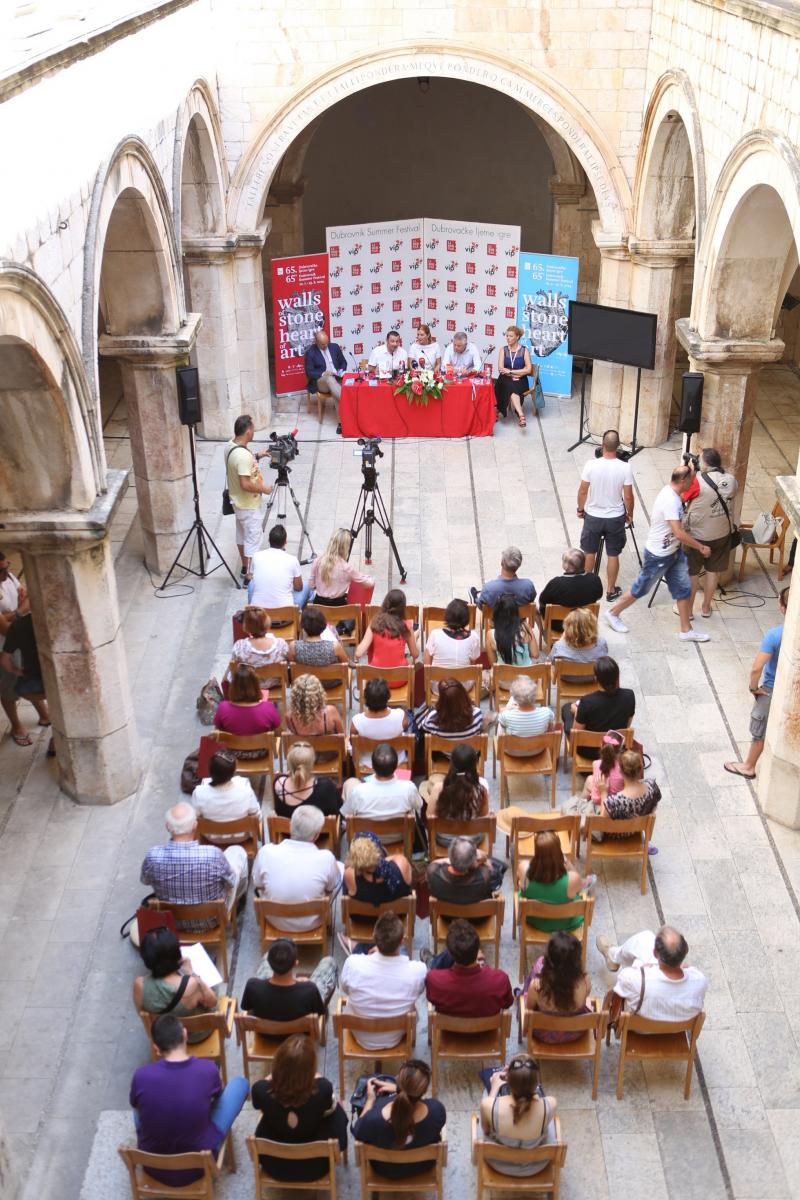