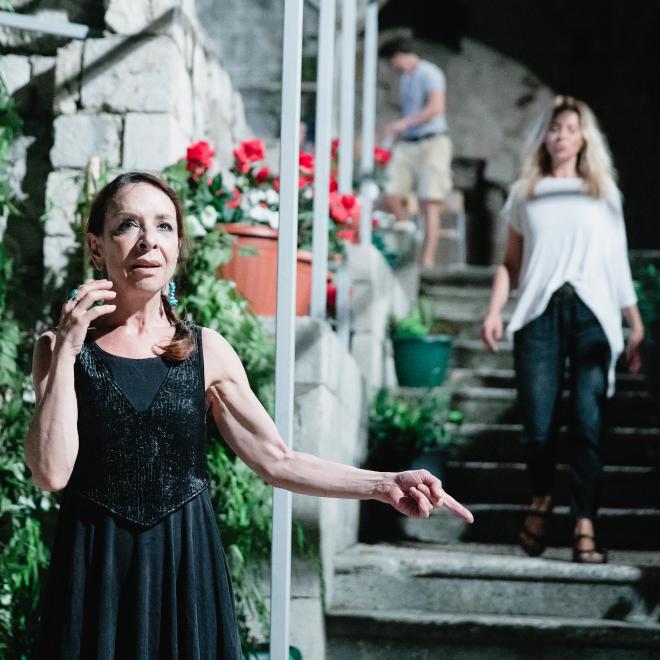 Geranium – a study on solitude

Geranium, one of Ivo Vojnović’s earliest works, announced the upcoming wave of Croatian literary realism at the end of the 19th century. Geranium is a work about solitude. Geranium is a story about a woman named Mare, who is said to have been born old. Geranium is a story about a small house at the end of a village. It is not a story with a great love plot and Mare is not a hero who turns her world upside down with her deeds. Mare lives in a small house by the Sea. She works her garden and lives alone. Sometimes you see her, if you take a good look, passing down the street. In Geranium, as in all his great later works, Vojnović treats this solitude as a continuous, progressive state. Solitude as a space and time of identification of the protagonist’s state. He breaks down this seemingly dead state, this lack of action into a process which takes place in seemingly equal pace both for the reader and the protagonist through whom we experience this state. In this work, solitude is a matter of giving in to fate, an expression of being confined by the place of our birth. Mare consorts with solitude so others would not have to get to know it.

This work lays down the sum of the person who bears such a burden, the complexity of her decisions and the strength needed for their execution. The theme of Geranium is not something that is obscure, hard to discern – it is something we can all clearly see, but which can be difficult to admit to ourselves and to others. Divergent emotional states will be cast off as banalities in a lack of bravery to talk about them. Thus, Mare will be called ugly, of unfortunate birth, incompetent and it will be said that she is without any potential, that she has no right to be able to become anything, all that for no good reason. But Mare will live her life. In the fullness of what life means, for any of us.

In this play, this Vojnović’s view of solitude is supplemented, but also counterposed, by Antun Šoljan’s Island. Island offered as a place of escape. A place where we can be alone. Where we can rest. Where we can enter solitude, the end of which, unlike the one in Geranium, we can discern, but do not want it. The phantasmagoria of Šoljan’s island is not longer than a summer vacation. The island motif serves as a place for existential consideration, for seclusion which reveals to what extent we allow ourselves to give in to the illusion of the present, the illusion of time which might be waiting for us. Time does not wait. If we do not fill it with living, it will be filled with that void of solitude which we cannot always control. Time goes by and lets go of the ones who leave. Time goes by and shows on the faces of those who wait.

We gratefully acknowledge the support of Urša Raukar, Theater &TD of the Zagreb Student Centre and Tekstilpromet in preparations and realisation of this production. Many thanks also to Križek Yewellery, Festival Shop and Michal Negrin for their kind donation of jewellery for the play.