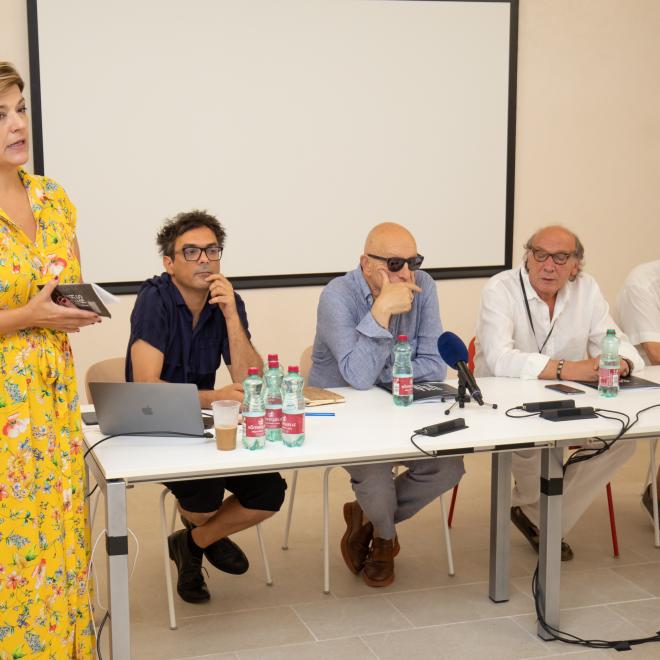 On the occasion of its 70th anniversary, the Dubrovnik Summer Festival is organizing a Symposium: Future of ambience, followed by the exquisite artistic program which is exploring site specific theatre approach through its meeting with new media, experimental music and light installations. Future of ambience is a program developed as a part of the Future Epics project, financed by Creative Europe programme.

INTRODUCTION by DORA RUŽDJAK PODOLSKI, Artistic Director of the Festival

Dora Ruždjak Podolski has directed around seventy theatre, musical and opera projects in Croatia and abroad. She teaches acting at the Zagreb Academy of Music and Zagreb Academy of Dramatic Art. From 2009 to 2012, she was appointed the Dubrovnik Summer Festival's Theatre Programme Director.  She directed several successful site-specific projects at the Festival. She has been appointed the Artistic Director of the Festival by the Croatian Minister of Culture in 2017.

In an open discussion with the artists and the directors of the Festival who have left a significant mark on the Dubrovnik Summer Festival since the 1970s until today; we will talk about Dubrovnik as an ideal stage for theatrical treatment of classical authors. In which way has the Festival marked Dubrovnik’s contemporary urban features, can we compare the ambience in the past with the current one and what kinds of ideas about the future of the Festival, city, and its culture do the people who have left a significant impact on the cultural policies of Dubrovnik and Croatia have?

Paolo Magelli was born in Prato, in the heart of Tuscany. His artistic development was greatly influenced by his teacher Giorgio strehler, whose assistant Magelli was. Along with Roberto Benigni, Pamela Viloresi and Marcello Bratoli he became one of the founders of “Teatro studio del Teatro Metastasio” at the beginning of the 1970’s. There they studied cultures that were less known to the public. Magelli directed on almost all stages in ex-Yugoslavia, Germany, Switzerland, Belgium, Italy, south America, Hungary, Israel. He won many international theatre awards. He has been the headmaster of “Teatro stabile della Toscana” since 2010 and associate professor at the Drama Academy of the Zagreb University, department Theatre Director.

Ivica Kunčević is a theatre director who was serving as Dubrovnik Summer Festival Theatre Programme Director from 2002 until 2009. From 2008. he has been a professor at the Academy of Dramatic Art at the University of Zagreb. He has staged more than hundred theatre plays. In 2012. he published the book Dubrovnik Site-Specific Thetare.

Ivica Prlender is a historian, set designer and a professor at the Faculty of Humanities and Social Sciences of the University of Zagreb. His specialty is history of Dubrovnik and Medieval history of Eastern Europe. He has served as Artistic Director and Executive Director of the Dubrovnik Summer Festival for 11 consecutive years.

Saša Božić is a Croatian theatre director and dramaturge present in the field of European contemporary dance. His interests lie mainly in the widening of the performing arts field – working on a thin line between theatre, dance and performance, examining the porosity of their frames, and the position of the performer within the disparate modes of performing. His works rarely fit neatly into the category of choreography or directing. His distinctive combination of movement materials, visual imagery and texts follows the transformations between his multidisciplinary roles as choreographer, director and dramaturge. He was appointed Assistant to Festival's Artistic Director for theatre programme in October 2017.

Lecture: Citizans on Stage and Theatre at Home: On the City as Performance and co-producing Audiences in recent Productions of Rimini Protokoll

As 1% of your cities population you are asked to position yourself on the stage of the national theatre according some statistical queries. In an other show you are asked to come to a private living room in a neighborhood you never have been and discuss with people you do not know about your perception of Europe. Sometimes you are led by an artificial voice through strange paths through your city or you turn a non-place into a performance hot spot. You never know what you are asked to do if you buy a ticket for a Rimini Protokoll Show. For almost 20 years, the German-Swiss Collective is constantly pushing the borders of what theatre could mean and explores different ways of co-producing urbanity together with its audiences.

Imanuel Schipper is a lecturer and researcher at different universities and art academies in Germany and Switzerland. He has been working as a dramaturg for the well-known German Performance group, Rimini Protokoll with whom, for 20 years, he has developed a contemporary way of documentary theatre as intervention, as political think tanks. Most recently he has been the dramaturg for „ State 1-4“ a tetralogy on post-democratic phenomena.

Heritage is often associated with a certain degree of inertia and sometimes rigid stereotypes. The Centre des Monuments Nationaux has decided to challenge this assumption by inviting movement artists to think about these new spaces of dissemination through the “Monuments en Mouvement” (“Monuments on the move”) operation. Circus arts, often relegated to the periphery or abandoned areas, are one of the key features of this operation, which is looking to provide these new forms with rich and elegant spaces. Dizzying heights, verticality, horizontality, new perceptions of space and the quirky discovery of monuments transform these dialogues between circus artists and heritage into special and unique moments that conquer new audiences.

After training in geography and theater in Paris and Montreal, Simon Pons-Rotbardt turns to staging and thinks about new forms of representation, particularly in public spaces or to new play spaces. He is recruited in 2012 by the Center des monuments nationaux, France, to put in place a reflection on the development of performing arts in heritage places; he creates under the impetus of Philippe Bélaval the operation "Monuments en movement", national program of dance and circus that celebrated its fifth edition in 2019. With ‘Monuments on the move’, the Centre des Monuments Nationaux invites the public to rediscover France’s historic gems through the creations of up-and-coming and established artists from the world of dance and circus.

Following the conversations, commentaries and performances from the archives of the Croatian Radio, a talk moderated by Iva Lovrec Štefanović

Traces of time are solid in the space that remains from the history and becomes filled with new sounds. The traces that become the framework for new images of time and new experience of art are the backbone of the Festival that takes place inside of Dubrovnik’s ancient city walls.Those traces tell a story about the way the Festival confronted various spaces and times. In a dialogue with such traces of time (the remaining ones or those that have been created by the Festival events) one can discover witnesses’ texts and sound recordings of radio programmes in various formats kept in the Croatian Radio’s archives. Thus, they evolve into points of departure for thinking and contextualization of repertoire and spatial evolutions in the creations of the Dubrovnik Summer Festival.

Iva Lovrec Štefanović (1964) graduated Musicology and Comparative Literature from University of Zagreb.  Since 1988, she works at Croatian radio as journalist, author, host and producer of different radio shows and projects.  She conceived more than 40 series of programmes in different radio formats and topics ranging from early music, music for film and theater, specialized programs for contemporary and electronic music, and music documentaries. She has produced and hosted (or commentated) numerous live concerts broadcastings and some special concert projects in Studio Bajsić. Most important project is the series of live talk show programmes about Croatian music (Paths of Croatian Music, since 2000.) that was awarded by the Croatian Composers Society and Croatian Radio Television. She produces music documentaries since 2006., and from 2012. she launches series for adaptation of selected international programmes, but also produces radioscapes of different formats as author and/or editor – some of them are noticed and nominated, and shortlisted or awarded on international radio festivals (New York Radio Festivals, Prix Europa, Prix Marulić.)