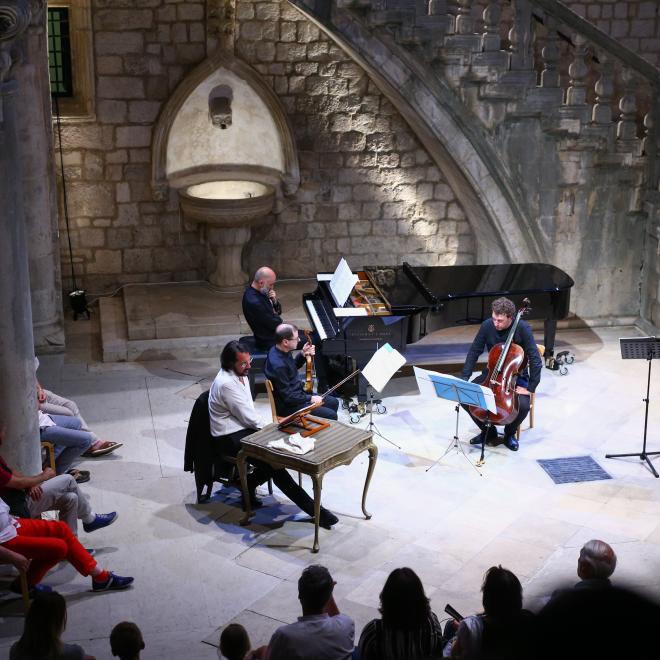 Song for male voice and Trio

“Thy ship must sail, my Henry dear” – Andante con espressione

Song for female voice and Trio

Tiroler Lied for Song for male voice and Trio

Sonata quasi fantasia op. 27 n. 2 “In the moonlight” for piano

Thema and variations on a melody of “Flauto magico” by Mozart

for cello and piano

During the story the ensemble “U. Giordano” will play some fragments of symphonic works by Beethoven.

Concert-show which describes an unprecedented profile of Beethoven through the reading of an imaginary letter of his nephew Karl to the English publisher George Thompson, in which he communicates his uncle’s death. The actor, in the place of Beethoven’s nephew, tells the story of Beethoven’s life evocating famous and less known themes of the composer, which are then played by the Ensemble Giordano, in a unique show.

The performance is mostly concentrated on less known compositions of Beethoven, like his folk songs, but it will also propose to the audience some transcriptions of his most famous works, like symphonic works and some original pieces for piano, violin and cello, to give a complete and sometimes unusual profile of the genius of Bonn.

The actor Giampiero Mancini will tell the story of fan exceptional life, revealing the suffering of deafness, the unrequited love, the iron discipline of the composer who revolutionized the history of music.