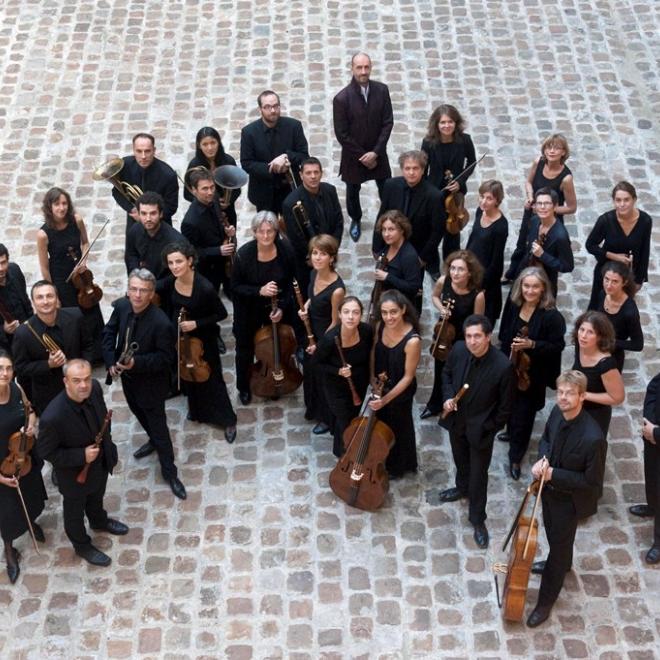 Founded in 1987 in order to bring back to life the great French repertoire played at the court of Versailles, the multi-award winning orchestra Le Concert Spirituel, under the baton of Hervé Niquet soon became one of the leading French early-music ensembles on period instruments (17th and 18th century). In this spirit, Le Concert Spirituel collaborates closely with the Centre de Musique Baroque de Versailles and is devoted to airing the works of the great composers of French musical heritage, from Charpentier to Lully, by ways of Campra or Boismortier.

Guest in the most prestigious international concert halls (London’s Barbican Center and Wigmore Hall, the Royal Albert Hall for the BBC Prom’s, the Luxemburg Philharmonie, Tokyo Opera, BOZAR in Brussels, Auditorio Nacional de Madrid, Shanghai Concert Hall, and Theater an der Wien), and in Paris each year at the Théâtre des Champs-Elysées, Salle Pleyel and Palace of Versailles, Le Concert Spirituel has been awarded many times.

While Le Concert Spirituel specializes in French sacred music and is recognized the world over for its work on this repertoire, an important part of its activity is also devoted to lyrical music. The ensemble unveiled works that received the most prestigious international awards : Marais's Sémélé was voted «Opera Recording of the Year» by the ECHO Klassik Awards in 2009, Grétry's Andromaque was awarded a “Grand Prix – Académie du disque Charles Cros” in 2010, and Campra’s Carnaval de Venise lately received the Supersonic Award and German Record Critic’s Award in 2011. And its production of Music for the Royal Fireworks (toured in China and in Japan) has received one of the highest existing discographical prizes: the Edison Award in Holland

2013-2014 engagements include an European tour with Striggio’s Mass for 40 voices in Paris, Utrecht, Bremen, Bruxelles and Metz, a unique recreation of the French version of Mozart’s The Magic Flute at Salle Pleyel in Paris, a new production of Rameau’s Les Fêtes de l’Hymen et de l’Amour at the Théâtre des Champs-Elysées, the Opéra royal de Versailles and the Palais de Beaux-Arts of Bruxelles (250th death anniversary of Rameau), a production of Purcell’s King Arthur (stage directors Corinne and Gilles Benizio alias Shirley et Dino) at the Opéra de Massy and a production of Purcell’s The Indian Queen (stage director Joachim Schloemer) at the Opéra-Théâtre de Metz.