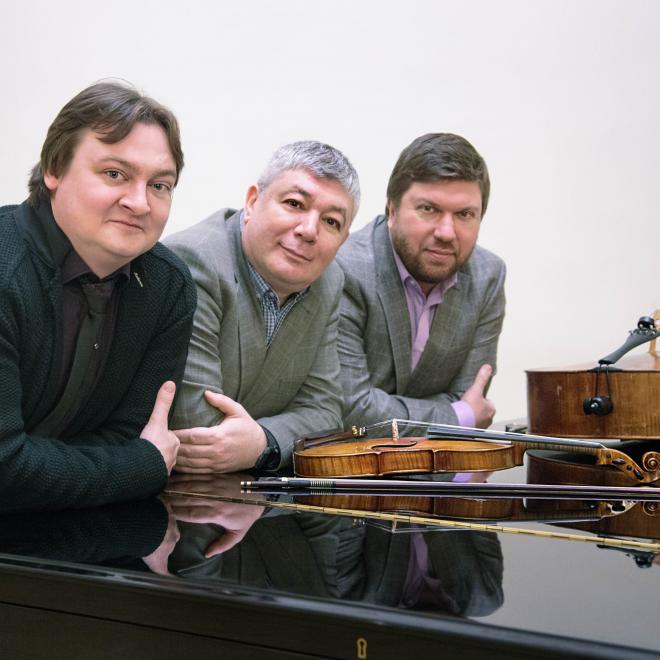 In 2005 Igor Uryash, Ilya Ioff and Alexey Massarsky joined forces as a piano-trio, giving it the name of the famous russian Composer Anton Arensky. The three members of Arensky-Trio first met in childhood, while they all were visiting the same Special Music School for gifted children in St.Petersburg ,where all of them still live today. Already at the early age they became very famous musicians through Russia. All of them performed a significant number of concerts as soloist and chamber musician,at the best venues of Russia ,like St.Petersburg Philharmony, State Capella of St.Petersburg, the Tchaikovsky-Hall in Moscow, just to mention a few. During their simultaneous study at the St.Petersburg Conservatory, they developed a close and enduring friendship. In 1994 the three appeared together for the first time as a trio on the stage of St.Petersburg Philharmonic Hall. One of the f first great success outside of Russia took place in 1999 in Rome, also some of their concerts have been recorded and broadcasted in Germany . Pavel Raykerus(piano) has graduated the St. Petersburg Rimsky-Korsakov State Conservatory (class of Professor A.Sandler). In 2000 he was awarded the diploma of laureate of the first prize at the Prokofiev International Competition for young pianists (Russia) and the European Culture Foundation “Pro Europe” (Denmark) - prize for achievement. 2001 Pavel won first prize of the Szymanovsky International Piano Competition in Poland and 2003 he was a winner of Anton G. Rubinstein International Piano Competition in Germany. Currently, Pavel Raykerus teaches piano at the Music Secondary School of St. Petersburg Rimsky-Korsakov State Conservatory Ilya Ioff (violin) studied under Vladimir Ovcharek, the leader of the TaneevQuartett. In 1991 he won the First Prize at the Vercelli Chamber Ensemble Competition in Italy. He concertizes around Russia and in most European countries,as well as Japan. As a soloist and chamber musician has performed with such a great persons as Marta Argerich, Julian Milkis, Yury Temirkanov, Mariss Jansons, Valery Gergiev. Today he is artistic director and leader of the Divertimento Chamber Orchestra of St.Petersburg and teaches at the St.Petersburg State Conservatory.