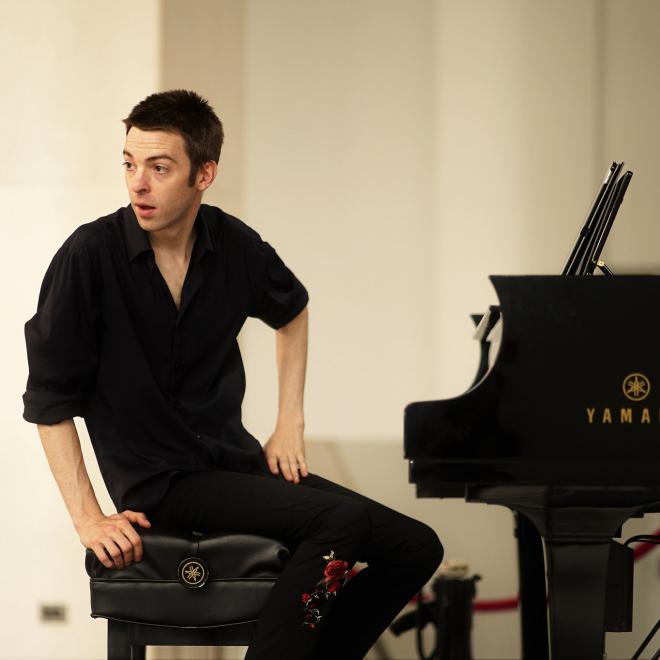 Founder of ‘The Bach Store’ and host of ‘The WTF Bach Podcast,’ Evan Shinners began his musical studies at age 9 and made his orchestral debut at age 12. Mr. Shinners grew up in the tradition of European sacred music, receiving lessons in singing and choral conducting from a young age. He attended The Juilliard School in New York where he studied piano with Jerome Lowenthal. Mr. Shinners holds two degrees from the institution (BM’08, MM ’10.)

Since 2010, Evan has devoted himself almost exclusively to the study and performance of the works of J.S. Bach. In 2011 he began studying the clavichord, and in 2018 began his ongoing harpsichord studies with harpsichordist Béatrice Martin. In 2012 Evan began a campaign to ‘Bach-upy America,’ to perform Bach in non-traditional venues in 48 states. The tour was featured on national television.

Mr. Shinners became a Yamaha artist in 2015 and began experimenting with Disklavier technology. Using the Disklavier, he was able to record Bach’s ‘organ sonatas’ on piano- the first of its kind. He also commenced on a massive recording project of Bach’s complete solo keyboard music on Bösendorfer instruments. In 2018 Mr. Shinners founded a non-profit organization with the goal of ‘bringing Bach to the masses in non-typical venues’. Using funds awarded by the Music Academy of the West, in November of 2018, Evan opened ‘The Bach Store’ in a 5,000 sq. ft. former bank on 56th and Broadway in Manhattan. There, he performed Bach for five hours, every day, for 37 consecutive days. In the evenings, Mr. Shinners hosted different guest artists every night, seeing nearly 70 different musicians perform Bach in the space during the run. His efforts landed him on the front page of the New York Times Arts. He was interviewed by German Public Radio and other international news sources.

In 2019, Mr. Shinners launched a second Bach Store around the corner from the New York Stock Exchange. Between the two installations, the repertoire that was covered - in free nightly concerts was impressive: the complete works for solo keyboard, violin, cello and flute, complete cycles of violin and harpsichord works, the flute and harpsichord works, motets for acappella chorus, three of the Brandenburg Concertos, and more. Both installations were visited by some 10,000 people. He is scheduled to open a third Bach Store in Germany in 2022.

Mr. Shinners hosts ‘The WTF Bach Podcast’ which seeks to explain the beauty and structure of ‘The Art of Fugue’ to someone with no previous musical knowledge. Fugues are dissected, played with voices isolated into different speakers, even played backwards or upside-down. Even with such daunting subject matter, the podcast has 20,000 listeners in over 50 countries. The guests interviewed are among the most important in current Bach thought: jazz pianist Brad Mehldau, harpsichordist Robert Hill, mandolinist Chris Thile and former director of the Bach Archive in Leipzig, Christoph Wolff.

Since 2015 Mr. Shinners has performed nearly all of the solo keyboard works of J.S. Bach from memory.