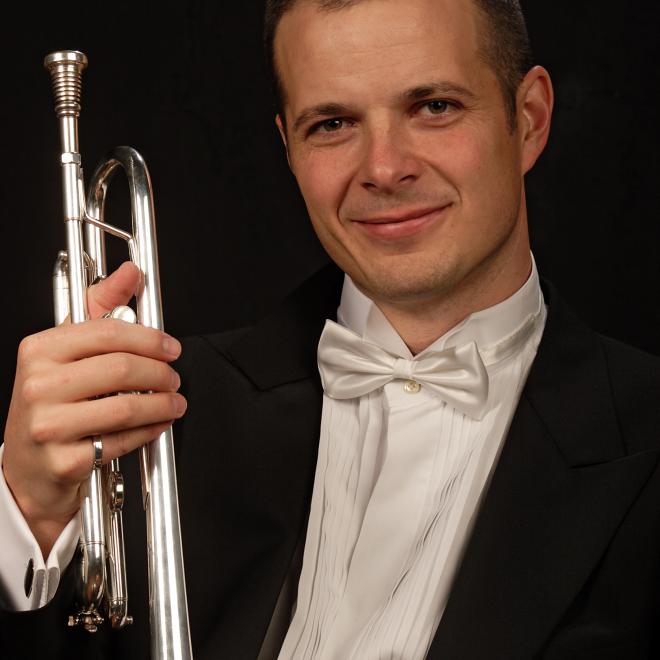 Vedran Kocelj (Dubrovnik, 1977) graduated fromthe Academy of Music in Ljubljana with Stanko Arnold, continuing his education in master classes with John Wallece, Bo Nilson and Ed Carrol. In 1999 he won the first prize at the competition of young musicians in Slovenia and later qualified for the semifinals of the international competition in Toulon 2000 and the Maurice Andre competition in Paris 2006.  In 2000 he successfully auditioned and toured Europe with Gustav Mahler Youth Orchestra under Pierre Boulez.

He is one of the leading Croatian trumpet soloists with a wide range of repertoire, playing some of the most challenging trumpet concerts (André Jolivet, Michael Haydn, 2. Brandenburg Concerto, Chute d'etoiles by Matthias Pintscher). Known as a promoter of Croatian music, Vedran Kocelj was one of the three soloists at the first performance of the Second Zagreb Concert by Berislav Šipuš comissioned by The Zagreb Soloists. He also performed at concerts and made studio recordings of Serenade for Trumpet, Piano, Strings and Percussion by Bruno Bjelinski as well as the first integral version of Concertino for Trumpet, Strings and Timpani by Boris Papandopulo. Both recordings were played with the Radio and Television Symphony Orchestra under Mladen Tarbuk. A decade after Milko Kelemen had written his Tromberia, Vedran Kocelj played the soloist part in the world premiere of that piece. The author dedicated this piece to a renown trumpet player Reinhold Friedrich, but the interpretation of the piece by Vedran Kocelj, Zagreb Philharmonic and Luca Pfaff at the 27th Music Biennale Zagreb was met with the utmost exaltation of the audience, critics and the author himself.

As a versatile musician playing music from different epoches, Vedran Kocelj has heen the principal trumpet player of the Croatian Radio-Television Symphony Orchestra since 1998, and a member of the Cantus ensemble specialized for contemporary music. He plays regularly with the Croatian Baroque Ensemble and had been playing with the Croatian Brass Quintett for five years performing numerous concerts in Croatia, Italy, Switzerland and China.