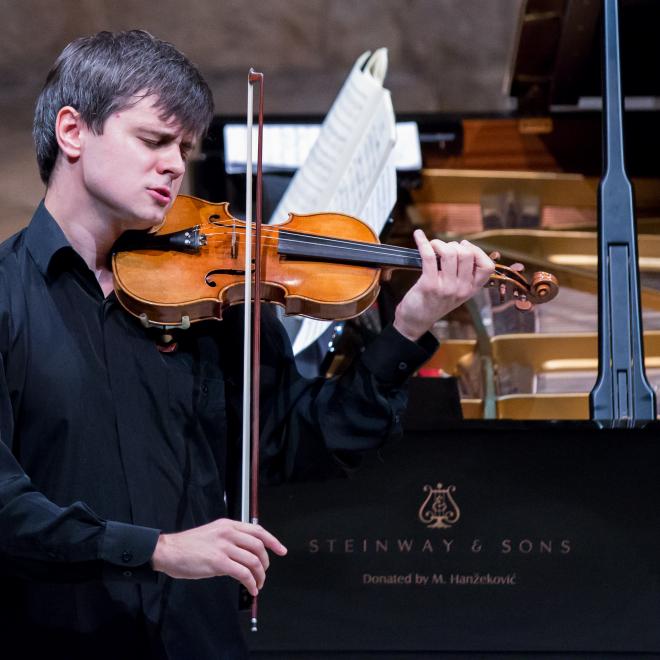 Ukrainian violinist Aleksey Semenenko is praised for passionate performances replete with “stunning technique and intonation, verve, wit, delicatesse, and beautiful phrasing” (The Boston Musical Intelligencer), as well as consistently demonstrating “an unparalleled level of refined musicianship and stage presence” (The Strad).  This was evidenced in his triumph at the 2015 Queen Elisabeth Competition in Belgium, where he captured Second Prize and went on to perform Laureate concerts throughout Belgium with the Orchestre Philharmonique Royal de Liège and with the Brussels Philharmonic.  In 2015-2016, he performs in Europe and in the U.S. with recitals and concerts with the Eastern Connecticut Symphony, the DuPage Symphony, and the Meridian Symphony.

Mr. Semenenko has appeared as soloist with orchestras including the Moscow Virtuosi, the Kiev National Orchestra, and the Sinfonietta Hungarica, among others.  He appeared at the Interlaken Classics Festival in Switzerland as soloist with the Zakhar Bron Chamber Orchestra and toured Germany. At the 2011 Musik:Landschaft Westfalen Festival, he performed Paganini’s Concerto No. 2 with the National Philharmonic of Russia under Vladimir Spivakov, and was subsequently invited by the Spivakov Foundation to perform at the Kremlin in Moscow and at the Moscow International Performing Arts Center. An avid chamber musician, Mr. Semenenko founded the Stolyarsky Quartet, which has given concerts in Russia, the Ukraine, France, Malta, and Switzerland.

Born in Odessa in 1988, Mr. Semenenko began his violin studies at the age of six with Zoya Mertsalova at the Stolyarsky School, and only a year later performed Vivaldi’s Violin Concerto in A Minor with the Odessa Philharmonic Orchestra.  He currently studies with Zakhar Bron at the Hochschule für Musik in Cologne.

Mr. Semenenko plays a 1760-70 Carlo Ferdinando Landolfi violin, loaned to him by the Deutsche Stiftung Musikleben fund of Hamburg, Germany.