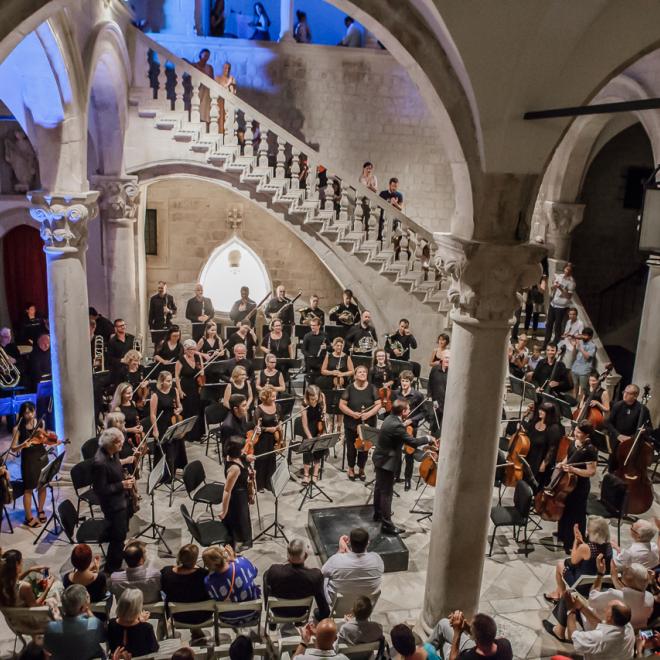 In 2022, the Dubrovnik Symphony Orchestra marks the 97th anniversary of its ongoing work. As an essential part of the rich and diverse cultural heritage of Dubrovnik and Croatia, the Orchestra continues to perform in the unique ambiances of its City. They present the musical repertoire and inexhaustible source of quality cultural events to their fellow citizens and visitors in spaces such as the atrium of the Rector's Palace, city churches, and squares. In addition, DSO regularly performs with well-known local and internationally renowned artists, interpreting works by classical music masters in Dubrovnik and on their tours around the world.

Dubrovnik Symphony Orchestra continues a long and significant musical tradition that developed in the period of the Dubrovnik Republic (1358-1808). The Orchestra in Dubrovnik has been active since 1924, initially in a semi-professional organization and then in a professional composition. It was founded by young enthusiasts called the Dubrovnik Orchestra, which in 1925 was transformed into the Dubrovnik Philharmonic Orchestra. In the first years, the Orchestra is joined by an increasing number of members. Thus the repertoire itself is enriched with more complex musical works. Along with well-known conductors Tadeusz Sygietynski and Josef Vlach Vruticky, they produce works by the Polish-Dubrovnik composer Ludomir Michael Rogowski.

The City of Dubrovnik has recognized the importance of a diverse tourist offer and visitors' interest in cultural events. Therefore, in 1946, the Dubrovnik City Orchestra was founded as a professional music body that took over the role of the holder of the musical part of the Dubrovnik Summer Festival. For a short time, the Orchestra was called the Dubrovnik Festival Orchestra. With the chief conductor, maestro Nikola Debelić, the Orchestra toured extensively in the 1970s (Switzerland, Germany, Belgium, the Netherlands) and went on a three-month tour to the US and Canada. The Orchestra last changed its name in 1992 and has been operating under Dubrovnik Symphony Orchestra ever since.